Lightning Creek: on 15 acres, is at the western edge of the scenic city of Clark Fork, along the trout stream for which it was named. Located just 25 miles east of Sandpoint ID, Lightning Creek offers affordable rates for a variety of services. The "park" has been in existence since the early 40's.
Lightning Creek is a self storage, boat & RV storage facility and a mobile / manufactured home park. We offer single and double wide spaces for just about any size home. 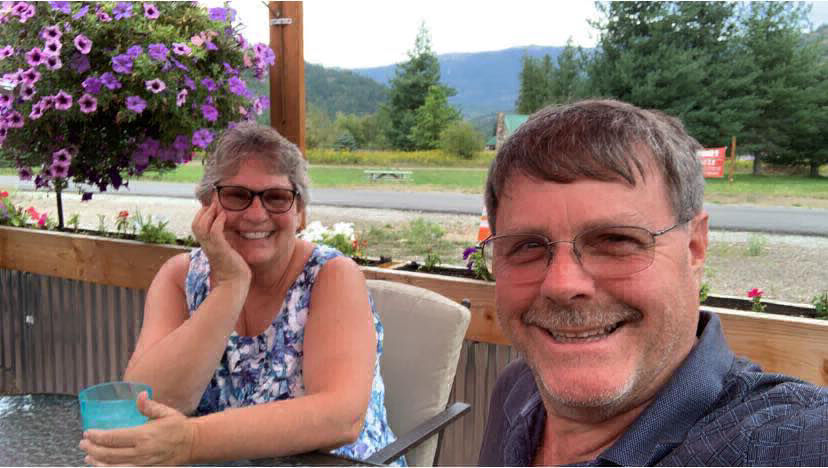 We started the self storage business in 1991 about the time the storage boom was coming alive.  Over the years we've expanded to over  150 units.
We offer competitive rates and an assortment of sizes. Our units are located on the highway frontage for easy 24 hour access. 16 Security cameras record 24/7 for added protection. We have wide driveways to accommodate the largest moving trucks.

Need help in choosing the right storage for your particular needs?
Look no further

WE HAVE NEW STORAGE UNITS

Renting a storage unit can be daunting. Depending on the size of your items you need stored, how do you choose which size unit? We can make things a little bit easier for you. Use the following guidelines to help you choose what will be the best unit for your needs. If you have any additional questions or need assistance, feel free to contact us. We are always willing to help.

List may not reflect the most current pricing and therefore we can't guarantee these prices at all times. Call for current prices.

5x10 units are 50 square feet. Some items that are suitable for storing in 5x10 units are furniture, chairs, boxes of personal items, Twin and Full sized mattresses.

8x10 units are 80 square feet and larger than a standard walk-in closet. These units are best suited for storing items such as larger boxes of personal items, small furniture and larger mattresses and frames.

6x12 units are 72 square feet and although they are smaller than the 8x10’s they have a 10 foot ceiling, giving you 160 more cubic feet of storage, therefore they are capable of storing many more items such as large appliances (washers, refrigerators), mattresses, bed frames, multiple boxes of personal items, cabinets, and seasonal gear.

10x12 units are 120 square feet along with the taller ceiling, these will hold many more cubic feet of items. Most items from a studio apartment or 1 bedroom homes could fit in this unit.

10x20 storage units can store the contents of a small 2 or 3 bedroom home. Some items that are commonly stored in a unit of this size includes large furniture (sofas, tables, etc.), king sized mattresses, seasonal gear, and large appliances (washers, refrigerators, etc.).

12x32 sized storage units can store the contents of a multiple bedroom house along with your garage. Some items that are commonly stored in a unit of this size includes large furniture (sofas, tables, etc.), seasonal gear, king sized mattresses, and large appliances (washers, refrigerators, etc.). Boats, campers and other large vehicles can be stored as well. 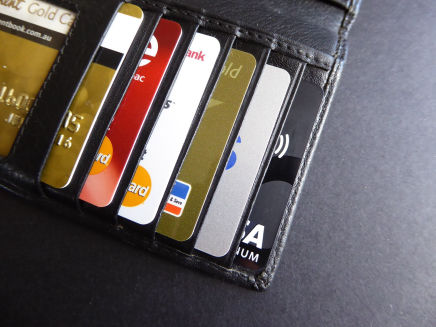 With over 55,000 square feet of secured indoor storage, Lightning Creek can store "anything" you can haul onsite. We specialize in boats, recreational vehicles including 5th wheels, pull campers, motorhomes and much more. Do you have jet ski's, snowmobiles and motorcycles but don't have a secure place to store them during the off season? Bring them over! What about your boat trailer for summer storage? We can do it too, inside or outside, it's up to you. Our prices are comparable to the area.
We do not winterize or summerize your "toy" but can recommend the services if needed.
We are glad to reserve a space for you if you will not be coming in before October 15th. Since space is limited we recommend calling early to get on the list. 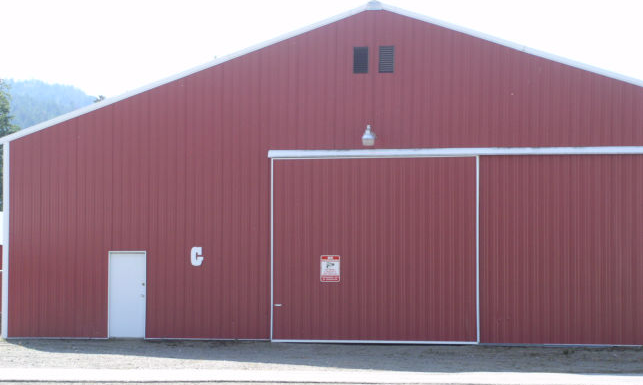 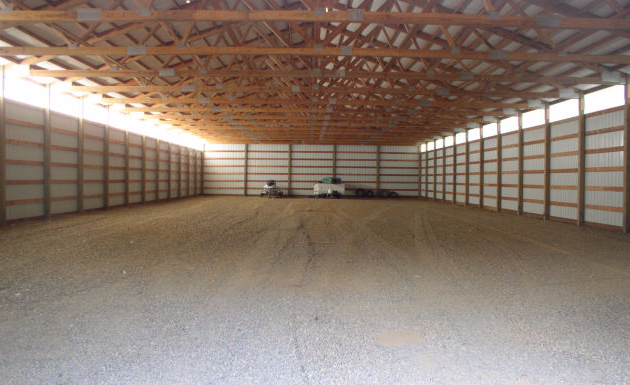 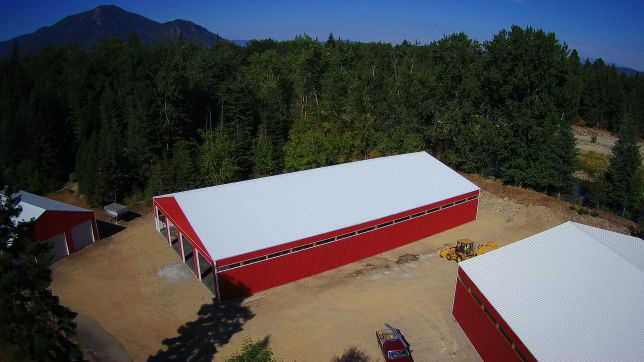 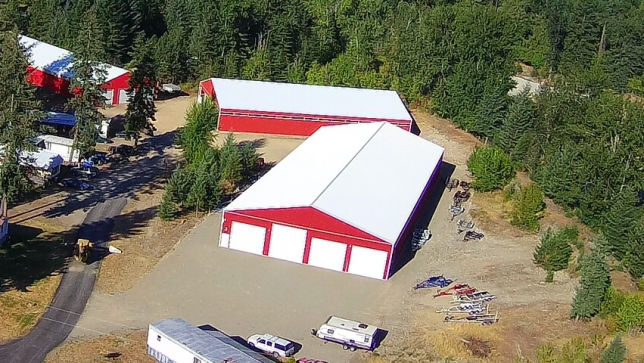 Boats are measured based on the vessel's registered length*, everything else is based on the bumper-to-bumper length. Prices listed are per foot per month. Seasonal rates are available, some restrictions apply.
*Boats with extra long trailers or other protrusions may incur extra charges.

*Motorhome width is measured at the widest point (usually the mirrors).

Measurement is for the maximum width of boat or its trailer, which ever is wider.
Cars and pickups
Pull Campers

Single ski on a dbl trailer, charge is for double.

Measurement is for the maximum width of boat or unit. Very large boats 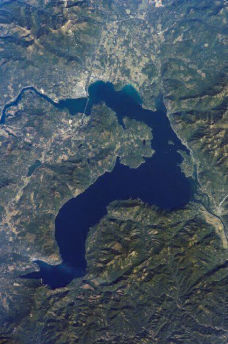 Lightning Creek is located at the western entrance of Clark Fork on highway 200 ~within walking distance of downtown, 25 miles from Sandpoint and 8 miles from Montana. 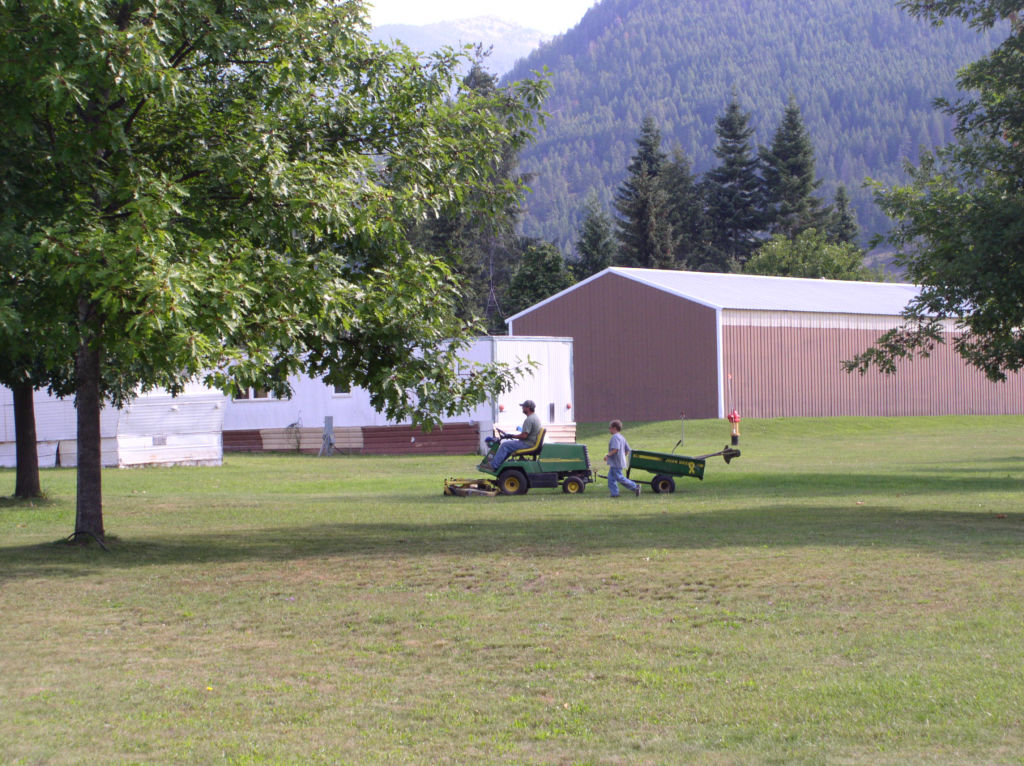 Lightning Creek has 44 mobile spaces in the park, of which, 11 are set up for a double wide.
Most pads will accommodate a 70' long mobile, all pads have 200 amp service with septic and water connections. Spaces are available. SEE BELOW FOR MORE INFO ON SPACES

Lightning Creek maintains the grounds, in the spring and summers months, we mow almost everyday to keep the grounds clean and tidy. In the winter we may be plowing snow at anytime.

The office manager will sit down with you and answer all your questions about our Park and ask you questions to determine if we have the services you require. The manager will give you a copy of the Park Rules to help you understand our policies.

Lightning Creek screens ALL prospective tenants prior to allowing tenancy. You must fill out our credit application and pay a nominal fee for processing and finally, pass the credit check. The credit check is processed by an independent company, not our staff and usually takes three to four days to complete.

Depending on what you will be bringing in to live. We will require you signing a rental agreement, After paying all fees, rents and deposits associated with the space, you are ready to move onto the property.

SINGLE WIDE SPACES:
Most single wide spaces will accomodate up to a 14' wide by 70 foot long mobile and space for 2 vehicles.

DOUBLE WIDE SPACES:
Our Double wide spaces can accomodate 24-28 foot wide units and up to 70 foot length. these space include three vehicle per spot. 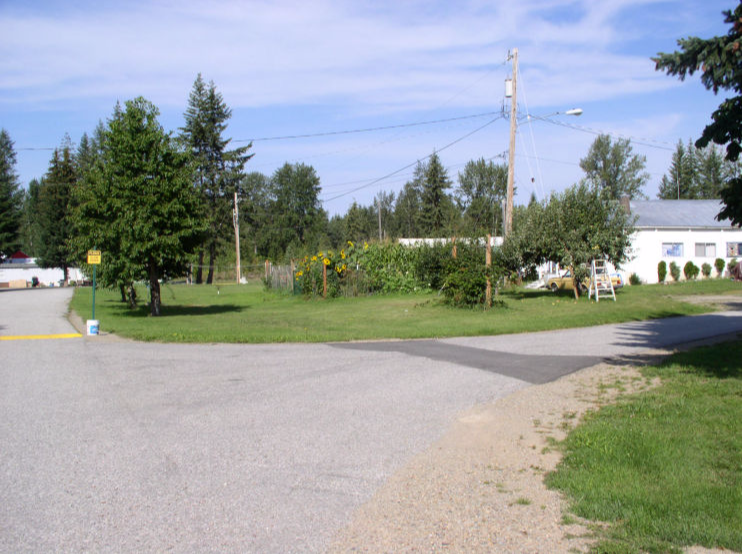 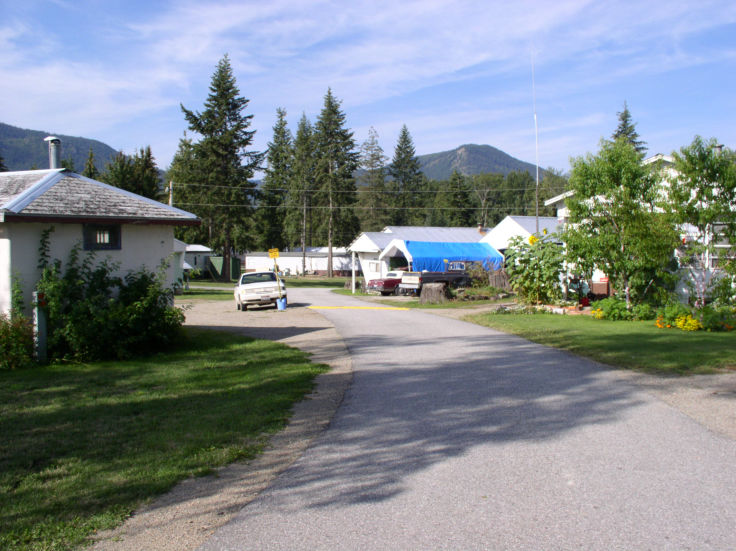 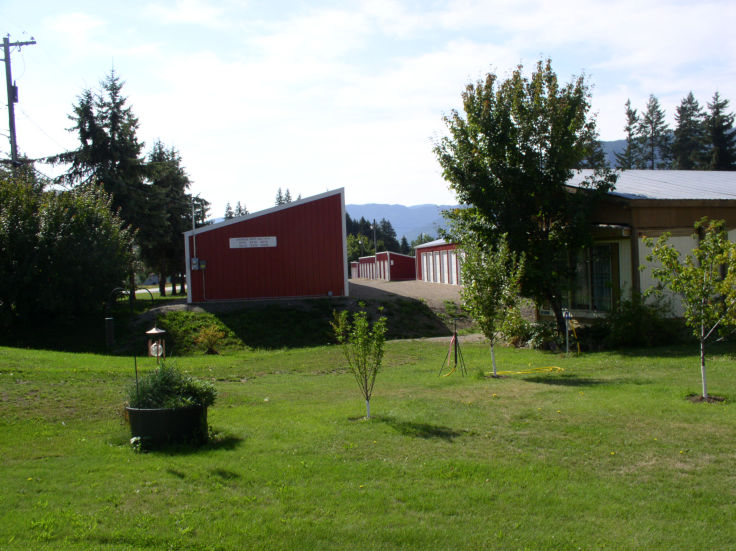 Clark Fork is concidered a bedroom community of the greater Bonner County area with a population of 550 year around residents. The surrounding area has a population of approximately 2000-3000 depending on the season.
Local ammenities in and around Clark Fork include: Markets, Gas stations, Restaurants, Churches, Junior/Senior High School, Grade School (6 miles), Mini Storage, Motel, Thrift Store, Antiques, Hardware, Nursery.
Area activies include: Two Community Centers, Youth Center and Athletic Club which provide events year around, including Bingo, Exercise classes, Quilting, Weaving and Painting to name a few.
Clark Fork is surrounded by National Forests, Lakes, Rivers and Streams where you can Hunt, Fish, Hike, Backpack, Camp, ATV, Snowmobile, Cross Country Ski, Water Ski, Kayaking and many more.
The City of Clark Fork became a viable town in the early 1880's during the construction of the Northern Pacific Railroad line through the Bitterroot and Cabinet Mountains. It has remained a small community throughout a 100 years plus of history and its citizens have seen considerable mining, logging, sawmills, farming, Forest Service activity, fish hatcheries, dam construction, fur trapping activity, collegiate studies and homes for teens. Also, for most of it's history the railroad maintained a station and section crew in Clark Fork. Clark Fork became an incorporated city in 1912.
In the 19th century the Clark Fork Valley, like the shores of Lake Pend Oreille around Hope, was inhabited by the Flathead tribe of Native Americans. It was explored by Meriwether Lewis of the Lewis and Clark Expedition during the 1806 return trip from the Pacific. The river is named for William Clark.
Much of Clark Fork's story over the following years had to do with crossing the river. The bridge on the Clark Fork River provided one of the only passes to the north, with the steamboats bringing miners making the arduous journey to the Kootenai gold rush, this was one of the only ways to travel. Before a bridge was built, Clark Fork had a ferry to make the crossing. Early ferries were nothing more than logs lashed together. Later, records indicate a ferry was operating in 1893, but this was a decade after the Northern Pacific line was put in place, so it is safe to assume there was a brisk business with ferry crossings during construction.
Most of Clark Fork's residential and business district is platted on land laid out in lots by John and Annie Nagel in 1903. John Nagel had received patent from the Federal Government in the year 1900. Early settlers who have descendents in the area are Foster, Vogel, Mead, Klug, White, Hazelroth, Brashear, Reed, Bixel, Johnson, Webb, Derr, Nagel Sheilds and Daugherty. A 1950 News-Bulletin article mentions Herman (Fitz) Vogel, Sr. as the longest resident of Bonner County.
Until WWI there was a lot of sawmill activity, then to a lesser degree through the 1950's. Early sawmills include McGillis and Gibbs, Lane and Potter. From the start until the late 1950's, mining operations played an important role in the community's economy. Approximately 75 men were employed in the mining and milling industry during the peak years. The Whitedelph mine and mill located near the Spring Creek fish hatchery began operation in 1926 and ceased in 1958. It yielded galena ore assaying principally in silver, lead and zinc. There was the Lawrence mine located on Antelope Mountain near Mosquito Creek and near what was known in recent past as the University of Idaho field campus. There are numerous other prospect holes scattered all over nearby hills.
Until WWII the Clark Fork Valley supported numerous small farms which were usually homesteads staked out by early settlers. Since then, the small farms have disappeared and in their place are fewer large farms.
Taken from the Bonner County History Book

Made with Mobirise ‌